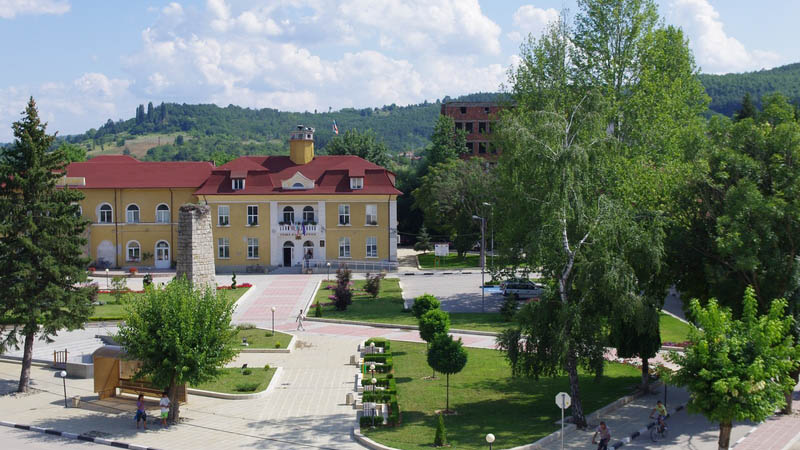 The population of the municipality is 7800 inhabitants.

Ugarchin is a town in Northern Bulgaria, District of Lovech. The town is the administrative center of the Municipality of Ugarchin.

Ugarchin is situated in the northern part of the Balkan Mountains at the foot the high peaks and down the river Kamenitsa and its minor tributaries: Lepetora, Sveta, Greshki Dol and others. It is situated in a basin rounded with small hills: Ivan Dyal hill to the south; Visokata Mogila (Chukara) to the east; to the north are Beli Kamak, Sredno Bardo and Zabiti Kamak hills; and to the west are Goli Rat and Chukata.

The town is well-run, with a well-maintained infrastructure. There are two general practitioners, a dentist, a community center, a secondary general school, a combined kindergarten, a sports complex including a sports hall with 830 seats and an Olympic-sized stadium.

Regular bus transport connects the town with the settlements in the area.

There is scant information about Ugarchin’s past and its land. Ugarchin is one of the oldest settlements in the District of Lovech. From randomly found objects, searches and research, it has been found that in Ugarchin’s land with small interruptions there has been life since ancient times. From the previously discovered single burial finds it can be seen that the man lived there during the stone-copper age.

About 12 miles in the southern direction is the Sopot Dam, which is the fourth largest in Bulgaria, 4 miles long and 1 mile wide. There is a place where fresh fish are offered. There are also several bungalows near the water. This is a great place to fish, escape from the summer heat, windsurfing for beginners or a boat trip.

Of interest are the eco-trails to Napoya Nature Reserve, Blue Viir and Koinets. Not far away are the unique cave Saeva Dupka, Troyan Monastery, Glozhene Monastery.

The coastal City of Varna with its famous beach resorts and international airport is about 195 miles away. The village is located only 80 miles to the capital City Sofia & International Sofia Airport, and about 150 miles away to the City of Bucharest (RO) and its International Airport “Otopeni”. Also not too far is the lovely architectural City of Ruse, only 110 miles away, bordering Bulgaria and Romenia on the Danube River.

It is only about 57 miles to the historical and touristic City of Veliko Tarnovo. Located on the famous “River Yantra” (the 3rd longest Bulgarian tributary of the Danube River), “VT” is one of the most popular destinations for tourists in Bulgaria. From its rich historical value to its thriving modern nightlife and lush natural surroundings that provide many excellent opportunities for outdoor recreational activities, Veliko Tarnovo offers you everything you could ever want for the perfect holiday!! Next to Veliko Tarnovo is the famous Ski Resort Uzana.