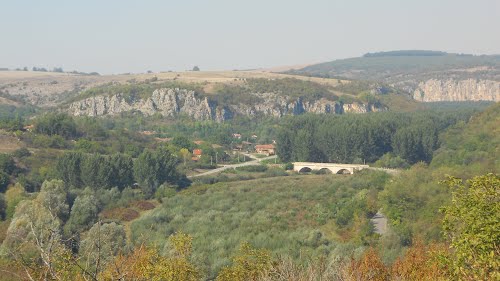 Chilnov is a village in Northern Bulgaria. It is located in Municipality of Dve mogili, District of  Ruse.

The village of Chilnov is located on the left bank of the Baniska Lom River, south of the municipal center Dve Mogili, at a distance of 7 miles, to 30 miles from the district city Ruse. The village is located 125 miles northwest of city of Varna, 10 miles northeast of the town of Borovo and 168 miles from the capital city Sofia.

There is a daily bus transport to Ruse and Dve Mogili.

The population is approximately 442 people.

The village has a town hall, a community center with a library, an Orthodox church and shops. The nearest primary school, kindergarten and health service are in the neighboring village of Baniska (5 miles away).

The history of the village lies somewhere in antiquity. The local legend says that the settlement originated as a Roman settlement under the name of Chil and was located to the east of the Baniska Lom River. In the locality “Selendan” are found stone lions, which are kept today in the Sofia Historical Museum. Floods and other natural disasters have been alleged to have forced residents to move the settlement to the higher left bank of the river. The new settlement was named after New Chil and from there Chilnov.

An interesting and frequently visited tourist attraction is the “Orlova Chuka” cave, which is about 5 miles from the village. Next to the cave is the chalet with the same name, where there are conditions for barbecue, archery, horseback riding, etc.