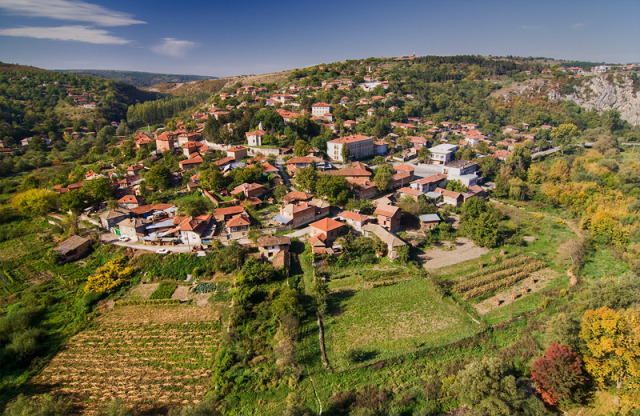 The Village of Cherven will give you everything you need for a peaceful and healthy living!!

It offers you GREAT LOCATION combined with QUALITY LIFE!!! ONLY 20 MILES TO ALL CITY AMMENITIES!!!

The village is located within the area of the Rusenski Lom Nature Park, with much wildlife to be seen! It’s a small village with a main shop, local pub, guest house, post office, and last but not least a 13th century fortress which looks over the village, which is stretched on both sides of the famous Cherni Lom River.

There is regular transport to nearby towns and cities. The very short distance to the City of Ruse makes the area very attractive to local wealthy people, willing to live in a secure and private area, and at the same time very close to their works and the urban life! Located only 20 miles away from the village, is the city of Ruse, well known as the “Little Vienna” because of its 19th- and 20th-century Neo-Baroque and Neo-Rococo architecture, which attracts many tourists. There are over 260 buildings, monuments of culture and dozens of sites with the “European Cultural Heritage” sign, which were built as a result of the enterprising and European spirit of the people of Ruse, who at the end of the 19th and the beginning of the 20th century attracted prominent European architects and builders for the construction of an urban architectural environment that is one-of-a-kind in Bulgaria. Ruse is the biggest Bulgarian river port on the Danube River, serving an important part of the international trade of the country. It is also situated only 60 km away from the Romanian capital, thus providing very easy access to the International Airport of Bucharest.

ATTRACTIONS AND FUN IN THE VILLAGE OF CHERVEN

Every year during summer seasons you can enjoy the attractions the village offers, such as Archery, playground for children, rope attractions and other fun activities. If you prefer while the children play, you can relax and have a drink at the open restaurant!

The Medieval Town-Fortress of Cherven is located about 30 kilometres south of Ruse, within the Rusenski Lom Nature Park, situated on a high hill in the canyon of the Cherni Lom River at the village of Cherven. The city is the successor of a Byzantine fortress from the VI century and flourished in the XIV century. The medieval settlement included an inner city-citadel on a high rocky plateau, an outer city and unfortified suburbs.

Ruins of the Byzantine fortresses from the VI century are preserved. The small settlement left continued its development and during the period of the Second Bulgarian Kingdom it transmuted into big town of Cherven, one of the leading military, administrative, economic, religious and cultural centers in the country.

Archeological excavations reveal the ruins of a big number of dwellings, foundations of 13 churches, administrative buildings, a feudal castle within the borders of the town, the two unique in their kind water pumping facilities with vaulted staircases, fortifications, the two gates, the defensive tower, fortified walls, etc.

The Rusenski Lom Nature Park is one of the ten nature parks of Bulgaria. It is situated along the canyon type valley of Rusenski Lom River – the last right feeder of the Danube. The park was announced protected area in 1970 and covers a territory of 3408 hectares and is recognised as a site of high aesthetic value preserving beautiful riverside terraces, meanders, high vertical rocks, areas of rich variety of species, caves, rock formations, historical monuments of national and international significance. It satisfies people’s recreation needs and gives an opportunity for scientific and exploration activities.