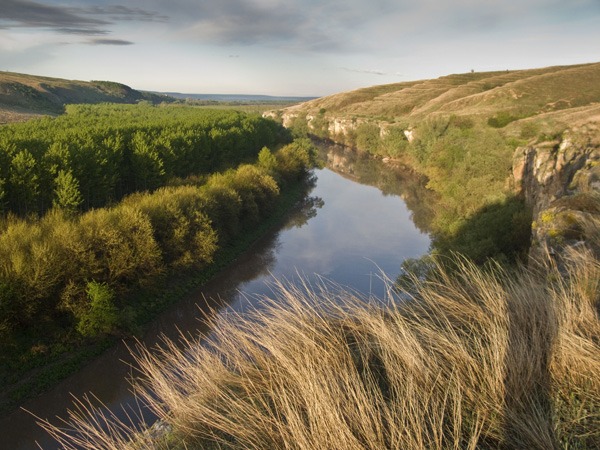 Krivina is a village in Northern Bulgaria. It is located in the Municipality of Tsenovo, District of Ruse.

The village is located near the Yantra River and the Danube River, which offer great opportunities for river tourism and fishing.

Here ends its 286-kilometer road Yantra River, overflowing with beautiful meanders in the vast Vardim-Krivinska lowland. Between the two large islands of Vardim and Batin, the Danube changes its direction to the northeast, making a slight turn to the Vlashkata lowlands. At the very bend, next to a small poplar forest, the mouth of the Yantra River opens.

The village is supplied with water, electricity and telephone. The connection with the other settlements in the region is through the bridge over the Yantra River.

In the Village of Krivina there is a town hall, a post office, a church, a community center and shops.

A general practitioner works in the village.

The nearest school is in the neighboring village of Novgrad, which is 2 miles.

The population is approximately 393 people.

One of the most significant events is the celebration of the holiday of the village of Krivina. Every year on 2nd of June the existence of this so interesting village is celebrated. The mayor organizes a program with folk singers, a recital of the young generation, as well as a fireworks display. One of the most exciting traditions is the show with motorcycles and lighted torches. For the end of the evening a big dance is formed in the center of the village, which includes all those present.

– Yatrus Fortress – located near the village of Krivina. It was built in the IV century and was one of the important Roman military centers on the Lower Danube. Remains of a Roman and early Byzantine city destroyed by the Avars in the early 7th century have been discovered. On its ruins in the VII-VIII century a Bulgarian settlement arose, protected by a massive stone fence with towers built outside. After archeological excavations in 1958. the eastern gate, public and private buildings, two old Christian basilicas, many iron swords, pottery, gold coins from the 10th century, tools and others were found;