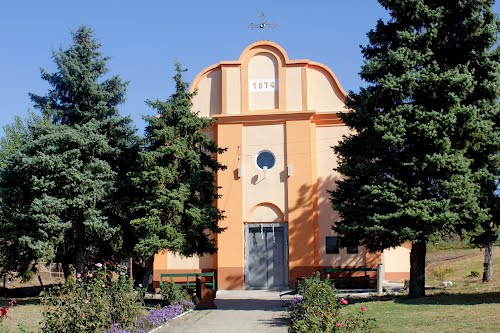 The village of Tranchovitsa is a village in Northern Bulgaria. It is located in Municipality of Levski, District of Pleven.

The village is located in the central part of the Danube Plain, at the great turning of Osam River. From three sides the village is surrounded by the river. Most of Tranchovitsa is situated on the slopes of high hills facing the Osam River. Osam River provides excellent opportunities for recreation amidst nature and amateur fishing.

Today, about 578 people live in the village of Tranchovitsa.

The village of Tranchovitsa is the holder of the Golden Print Award for a unique European settlement. This distinction is given to certain European cities and villages because of ancient historical heritage and unique natural resources. The award was presented by the “Official Representation of Unique Settlements in Europe” and the “European Forum of Experts”.

The village of Tranchovitsa was chosen by Archbishop Philip Stanislavov as the first seat of the Nikopol Eparchy. Here he built one of the first few schools in Bulgaria and that was in the distant 1650 year. Here, for this school, he also wrote the first Cyrillic print book called “Abagar”.

There are a town hall, a community center, shops and a restaurant. The care for the health of the people in Tranchovitsa is taken over by a general practitioner. A school and a kindergarten can be found in the village of Malchika.

The lyceum bears the name of the great Bulgarian actor Grigor Vachkov – Grissa, born in the village, and in his honor every year are organized Humor and Satire Festivals.

On the territory of the village of Tranchovitsa there is a dairy, which produces a real white brined cheese and a delicious cheese, meeting the BDS.

– Two Catholic churches – One of “St. Michael’s Church” was built in 1874 with donations by local residents and people from Poland and other Catholic countries.

– A beautiful natural landmark that must be visited is the Krushuna waterfalls in the Maarata area (25 miles) – this is the biggest water cascade in the country, with many travertine stages, rich of plants and animal species. For the convenience of the tourists an eco-trail was built, which allows you to enjoy the exquisite sight, inspired by the crystal water and fresh-green vegetation of the area.

– Natural Park “Persina”, which covers the 19 Belene Islands, is another landmark nearby (25 miles north). The uniqueness and ecological importance of the park consists in the fact that there are three biosphere reserves: Persinski marshes– a wetland of international importance inhabited by numerous colonies of waders; Milka and Kitka, covering the eponymous islands of the archipelago, are preserved floodplain forests (white willow and poplar). Here they nest in pairs of eagles – a rare species, included in The ” Red Data Book of the Republic of Bulgaria ” and in The book ” The European Red List of Birds ” and Protected area “Kaikusha”.

– Tourist attraction is the Devetashka Cave – one of the largest and most impressive caves in the country, situated on the banks of Osam River, about 30 miles southwest of Tranchovitsa.